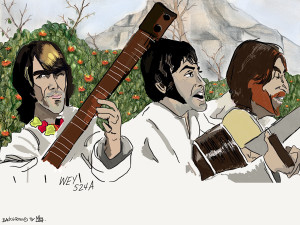 At the suggestion of Executive Producer Rick Wey, Richard and Robert discuss “the Kinfauns Tapes” (or “the Esher Demos”): 27 new songs composed by John, Paul and George mostly in Rishikesh, India during the Maharishi’s Transcendental Meditation retreat in early 1968 and taped at George’s home in advance of the studio sessions. Hear how these tunes evolved before their recording and release on the the group’s self-titled double-album. Songs include “Revolution,” “Honey Pie” and “Sour Milk Sea.”